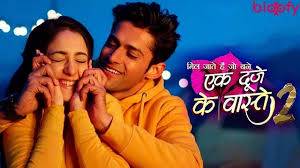 The romantic television series, Ek Duje Ke Vaaste 2 which has been streaming for quite some time now has gained popularity and widespread acclamation. Ek Duje Ke Vaaste 2 happens to be the spiritual sequel to the equally popular television series 'Ek Duje Ke Vaaste'. The series that started with the lead characters, 'Shravan' portrayed by Mohit Kumar and 'Suman', portrayed by Kanikka Kapur, not being able to get along well has now taken an interesting twist. While fans have been anticipating a romantic chemistry between the duo for a long time now, makers of the show have brought an interesting twist to the show. There are sparks of love emerging between Shravan and Suman as the duo have been spending a lot of time in each other's company, leaving fans in awe of the newly acclaimed couple and a common question: 'Will Shravan and Suman kiss?'.

While Shravan and Suman have now been feeling comfortable with each other after a long time of differences, problems between their houses have continued to worsen. The upcoming episodes are all set to showcase the deepening of the bond between the couple along with more quality time with each other. The next episodes will feature the duo spending a night on the terrace together where the couple will eat food together and discuss the problems between the two households. While the two positively sort their problems, the episodes will showcase Shravan and Suman sweetly falling asleep in each other's arms, raising the expectations of a romantic situation between the two. The show is all set to feature the couple waking up closely, beside each other giving in room to an upcoming kiss. While fans have been expecting their favourite on-screen couple to kiss, it is up to the makers to decide.