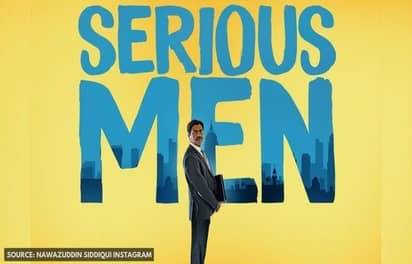 An update regarding Nawazuddin Siddiqui starrer 'Serious Men' has finally been revealed and fans are unable to contain their excitement. Nawazuddin's Serious Men has been among the list of the most-anticipated movies for a long time now following which makers have released a teaser and the release date. Serious Men is all set to premiere worldwide on the popular OTT platform, Netflix on 2 October, 2020. A thirty-second long teaser was also unveiled along with the details which showcases a beautiful illustration of Mumbai city and birds flying above featuring Nawazuddin Siddiqui's voice in the background. The actor starts with introducing viewers to Mumbai and then goes on to tell viewers that remarkably smart and serious men live inside the lavish and luxurious buildings situated in the city.

Nawazuddin describes the serious men as people who complicate simple things in life and treat them as serious ones. He also describes these people as people who question the number of dots present on a condom without easily accepting. The actor says that these serious men complicate and confuse other people, however are still applauded and respected because of their personality. Towards the end, Nawazuddin expresses his desire of raising his son 'Aadi' just like the serious men in the lavish buildings so that his son could gain respect and acclamation.

The much-awaited Netflix movie 'Serious Men', is loosely based on Manu Joseph's novel with the same title: 'Serious Men'. The movie is all set to showcase the story of a man who has not achieved much in life, however, decides to reach new heights with his son's help after he discovers that his son is a genius, capable of transforming his life and social, financial status. Serious Men is helmed by Sudhir Mishra and features Nawazuddin Siddiqui, Aakshath Das, Shweta Basu Prasad and Indira Tiwari in prominent roles.