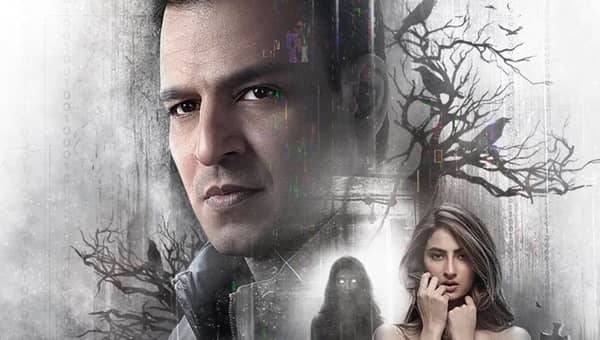 Ever since heart-throb Vivek Oberoi has announced the upcoming horror thriller 'Rosie: The Saffron Chapter, fans have been looking forward to further details in anticipation. The actor recently shared an interesting piece of news with fans mentioning that he himself will star in the movie. Vivek Oberoi is all set to produce the movie under his banner Oberoi Mega Entertainment as well as star in it. Palak Tiwari, Shweta Tiwari's daughter, is all set to make her Bollywood acting debut with the movie. Vivek Oberoi took to social media to share the exciting decision of joining the star cast of Rosie, alongside releasing his first look in the movie.

The poster features Vivek Oberoi's fixated, determined look amid a bunch of branches along with Palak Tiwari who can be seen standing in front of the actor donning a pretty, glittery dress. The poster features an eerie situation with the figure of a ghost, crows sitting on branches and a graveyard. The poster gives the right chills, leaving fans in further anticipation of the horror thriller. Rosie: The Saffron Chapter is directed by Vishal Ranjan Mishra and bankrolled by Mandiraa Entertainment and Oberoi Mega Entertainment in association with Prerna V Arora. The movie marks the acting debut of Shweta Tiwari's daughter, Palak Tiwari. It is reported that the movie will go on the floors in the month of December, 2020 while actors have geared up for the shoot in December. Rosie: The Saffron Chapter is based on the disappearance of Rosie, an employee at a big company in Gurgaon.