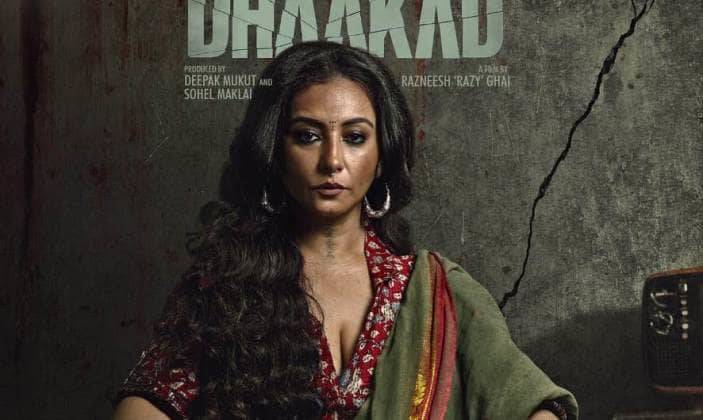 Kangana Ranaut's upcoming movie titled 'Dhaakad' is all set to hit the big screens this year on 1 October, 2021. The movie is an action thriller featuring Kangana Ranaut, Arjun Rampal and Divya Dutta in titular roles. Dhaakad is helmed by Razneesh 'Razy' Ghai and produced by Sohel Maklai Productions and Asylum Films in collaboration and co-produced by Qyuki Digital Media.

While the first look posters from the movie featuring Kangana Ranaut in a dapper role and Arjun Rampal in a super cool avatar have already been revealed, makers have released another intriguing poster featuring Divya Dutta. The new poster portrays Divya Dutta in a different yet bold avatar. The actress can be seen sitting with a fearless look on her face. A cigarette in her hand, boho jewellery, long, black hair, the actress is totally doing justice to her new look. In the poster, Divya Dutta is seen wearing an absolutely stunning saree, looking truly menacing and impending. Divya Dutta will portray the role of Rohini in Dhaakad, looking appealing but evil at the same time.

Makers have decided to release the movie on the occasion of Gandhi Jayanti following which fans have been in anticipation of the release. Kangana Ranaut who also portrays the lead role of Agent Agni in the upcoming movie has reported that the film happens to be India's first movie which is a female-led action thriller. While Kangana portrays a fearless role in Dhaakad, Arjun Rampal is all set to play the role of Rudraveer, a dangerous and cool antagonist in the movie. While complete details of the movie have not yet been revealed, fans are looking forward to the KanganaRanaut starrer.