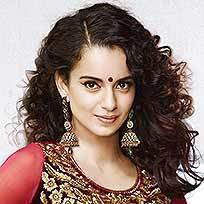 Kangana Ranaut was born in Bhambla, Himachal Pradesh, India in 23rd Mar 1987, she is now 30 years old and has a height of 5'5'' feet with fair complexion. She belongs to a Hindu family and her father Amardeep Ranaut is a Businessman and a contractor and her mother Asha Ranaut is a teacher. She has a brother Akshit Ranaut and a sister Rangoli Ranaut.

Kangana has completed her primary education from DAV School, Chandigarh, and secondary education from Elite School of Modelling, Mumbai as she has completed her 12th only. Now she is located at A 4 BHK, Khar, Mumbai. In the starting of her career, she was seen with Aditya Pancholi. Then her name was joined with the son of Shekhar Suman, Adhyayan Suman who is also an actor but things did not work as now they are separated. Then there was a rumor that she was in an affair with none other than Ajay Devgan but it was just a rumor at last. Then she was seen many times with Nicholas Lafferty who is a British doctor and recently her name was joined with the Hrithik Roshan.

Kangana Ranaut Latest News - Kangana earned a lot of money buy giving a lot hits she has a net worth of $12 Million and she takes 11-12 Crores for a movie which makes her one of the top paid Indian actresses. She also loves to collect cars and her collection includes a BMW 7 Series which is very expensive one. She was also spotted in some controversies as being a part of a celebrity world.

She was in a relationship with a guy 20 years older than her Aditya Pancholi and everyone knows what happened between her and Hrithik Roshan. Kangana started her career in 2004 with Gangster movie starring Emraan Hashmi and Shiney Ahuja which was a successful movie of that year and her role was praised not even by critics but by audience also and she won The Filmfare Award for Best Female Debut of that year and many more debut awards also. Then she was next seen in 2006 movie Woh Lamhe. Later she was seen in Shakalaka Boom Boom. In the year 2008, she was seen in Dhaam Dhoom, which was a Tamil movie. Her turning point of the career was doing Fashion in 2008 which was a Madhur Bhandarkar movie. Fashion was a blockbuster movie and she also got National Award and a Filmfare award for her acting in that movie. Later she is seen in many big movies such as Tanu Weds Manu in 2011 and Tanu Weds Manu Returns in 2015. Her role was praised in Krrish 3 in 2014, Queen in 2014.

She has won many awards like National Film Awards: Best Supporting Actress in 2008 for movie Fashion and Best Actress for movie Queen and Tanu Weds Manu Returns in 2015. She also won Best Supporting Actress in 2008 for Fashion and Best Actress - Critics in 2015 for movie Tanu Weds Manu Returns. She is now working on some projects like Rangoon which is releasing this year and Simran then she will be seen doing a biopic on Rani Lakshmi Bai.