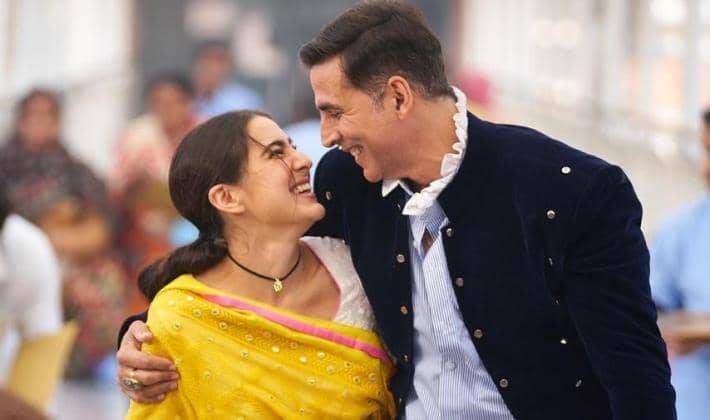 Atrangi Re, the upcoming Bollywood romantic drama movie is all set to feature Akshay Kumar, Sara Ali Khan and Dhanush in prominent roles. Interestingly, the shooting of the upcoming film has gone down the floors once again. Akshay Kumar who essays a pivotal role in the movie has started shooting for the film today along with Sara Ali Khan. The actors took to their social media to share the good news for fans anticipating a release of the upcoming movie. Akshay Kumar expressed his happiness regarding the movie by comparing the words 'Lights, Camera, Action' to an unmatched joy. While the actor requested for love and best wishes from his fans, Sara Ali Khan expressed her happiness by mentioning her privilege of working with Akshay Kumar. The shooting of the movie had commenced in March, 2020 in Varanasi however the same was terminated due to the coronavirus pandemic. Fortunately, makers resumed shooting for Atrangi Re once again in October in Madurai.

Akshay and Sara also shared an image featuring the two in a happy embrace. In the picture shared by the duo, Akshay and Sara in an embrace, can be seen smiling at each other. Sara can be seen wearing a beautiful traditional attire while Akshay can be seen donning a smart shirt and a blazer. Fans have been excited to witness the movie ever since it was announced as Akshay Kumar, Sara Ali Khan and Dhanush will be seen sharing the screen together for the first time. Atrangi Re is helmed by Aanand L. Rai and bankrolled by T-Series, Colour Yellow Productions and Cape of Good Films jointly. Atrangi Re is all set to be a romantic drama film with Sara Ali Khan essaying a double role. The actress will be seen portraying a dual role for the first time on screen. Sara Ali Khan will essay the role of a girl from Bihar and will be seen romancing Akshay and Dhanush. Reports suggest that the movie will release next year on the occasion of Valentine's Day.