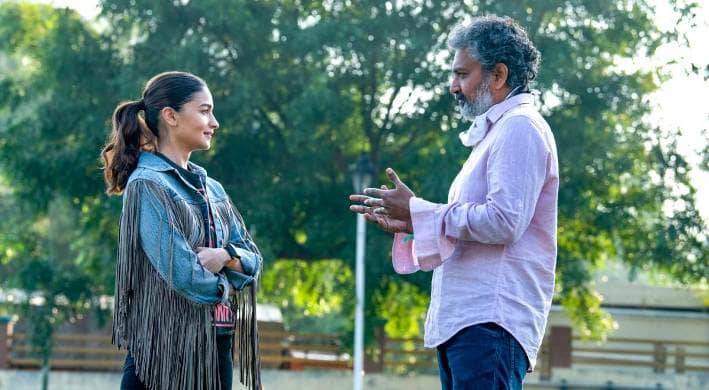 Bollywood actress Alia Bhatt is all set to make her debut in the Telugu film industry with filmmaker S. S. Rajamouli for his upcoming venture titled 'RRR'. Alia Bhatt has finally joined the RRR team in Hyderabad kick-starting the shoot for the big movie. The actress shared the wonderful news with fans through her official social media handle by posting her photograph. She also captioned her selfie, mentioning that she was finally on the route for Team RRR. The upcoming movie is speculated to be a big one, following which fans have been anticipating its release.

Images of Alia Bhatt engrossed in a conversation with the Baahubali director have also been doing rounds on the internet. Three images of the duo have been circulating on social media, wherein Alia can be seen spotting a denim jacket with frills, jeans and white sneakers. The director has also been captured sporting a casual look. The two can be seen posing in one image, while the other images portray the duo laughing and talking.

The upcoming movie 'RRR' is speculated to have a big budget of a whopping Rs 350 crore - Rs 400 crore. The movie is set to be a period action-drama movie, featuring N. T. Rama Rao Jr., Ram Charan, Alia Bhatt, Ray Stevenson, Olivia Morris in prominent roles. The movie has also roped in Ajay Devgn and Shriya Saran for cameo appearances. RRR revolves around the story of Alluri Sitarama Raju, the role of whom will be essayed by Ram Charan and KomaramBheem, essayed by N. T. Rama Rao Jr., the freedom fighters who fought against the British Raj and Nizam of Hyderabad. Alia Bhatt will essay the role of Sita, the love interest of Ram Charan's character. The movie is scheduled to hit the theatres on 8 January, 2021 and will release in the languages:  Hindi, Kannada, Malayalam and Tamil. The movie is helmed by S. S. Rajamouli and will be produced by D. V. V. Danayya.