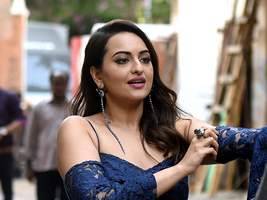 Sonakshi Sinha is an Indian actress who was born in Sinha family on 2 June 1987. The 29 years old Sonakshi has a mixed complexion and has a height of 5'6'' which is quite taller. Her father is a famous actor and a politician Shatrughan Sinha and mother Poonam Sinha is a homemaker and she has two elder brothers and their names are Luv Sinha and Kush Sinha, She is living in 49, Ramayan, 9th Road, JVPD Scheme, Juhu, Mumbai. It was said that Sonakshi was in a relationship with Aditya Shroff and they are still together. She completed her primary education from Arya Vidya Mandir, Mumbai, and her secondary education from Shreemati Nathibai Damodar Thackersey Women's University (SNDT), Mumbai and she graduated in Fashion Designing. Sonakshi is a talented actress perhaps she was born in actors family. She takes 4 Crore for a movie and her net worth is $10, Million.

She loves cars also and her collection contains BMW 5 Series Gran Turismo (GT) which is one of the expensive cars of BMW. She used to like Photography, reading, yoga, and dancing and thus she turned towards Indian Cinema where her father was also a successful actor. She wishes to work with Sanjay Leela Bhansali because he is her favorite director. Once her MMS were leaked and gone viral all over the India then it was proved that it was a fake video. Sonakshi Sinha Latest News - Sonakshi started her career by doing a debut movie with Salman Khan so the guarantee of success is there with a big actor like him. The movie Dabangg was the Highest Grossing Film of 2010 and killed all the competitions with it.

She lost 30Kgs for the role of a village girl she was going to perform. Her role was highly anticipated by the critics and by audiences also. She won all the debut awards of 2011 for her role including Filmfare and IIFA Awards. Then she did Rowdy Rathore with Akshay Kumar and it was also a hit movie, Then after giving first two movies back to back hit she did a Shirish Kunder's Joker and it was a disaster on box office and her next Son of Sardar with Ajay Devgan was also a disaster on box office. Then in Dabangg 2 she again nailed her role and was a big hit. Then her next movie was also a disaster one Lootera opposite of Ranveer Singh. Then she did Once Upon a Time in Mumbaai sequel and Bullet Raja with Saif Ali Khan, both the movies were average. Then she did many movies after that her recent movie was Akira and Force 2 both were action movies and did average business at box office. She has done Lingaa with superstar Rajinikanth in 2014. She is now working on some projects like Noor with Kanan Gill and Ittefaq Remake in the opposite of Sidharth Malhotra. She won Most Entertaining Actor in a Romantic Role - Female in BIG Star Entertainment Awards in 203 and her latest award is Best Actress (Critics) from Zee Cine Awards for Lootera in 2014.