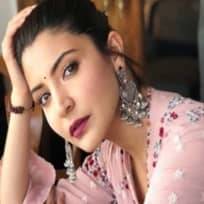 Anushka Sharma is an actress and a producer was born in Ayodhya, Uttar Pradesh on 1 May 1988 in a Hindu family. Her hometown is Ayodhya but she grew up at Bengaluru and then moved to Mumbai for a career. 28 years old Anushka have a great height of 5'9'' which is quite taller for a girl. Anushka's father Ajay Kumar Sharma is an ex-army officer and mother Ashima Sharma is a house wife. She has only a brother Karnesh Sharma who is also in Merchant Navy. They are basically living in Badrinath Towers, 20th floor, Seven Bungalows, Andheri, Mumbai. Anushka has completed her primary and secondary education from Army School, Bengaluru and Mount Carmel College, Bengaluru and graduated in Bachelor of Arts (B.A.) and Masters in Economics (Correspondence). Anushka always loved dancing and reading and she moved towards acting. She debuted in the opposite of Shah Rukh Khan in 'Rab Ne Bana Di Jodi" (2008) and under Yash Raj Banner, it was the best opportunity she ever had. And she proved it useful and nailed her acting in the movie.

Anushka Sharma Latest News - She was highly praised and anticipated for her role in the movie and she also won the Best Debut Actress from Filmfare Awards. She did a lot of movies after the blockbuster debut in Bollywood such as Badmaash Company, Band Baja Barat which was also a Yash Raj Film and did good business at the box office. After then she did Patiala House in 2011 and Ladies vs Ricky Bahl and again with Yash Raj's  Jab Tak Hai Jaan with Shah Rukh Khan and Katrina Kaif. Anushka was appreciated from her first movie and that's why now she takes up to 5-6 crores for a movie and her net worth might be $10, Million. She also loves to collect cars her car collection contains Range Rover SUV which is a quite choice of boys. As she is famous, she also found in some controversies such as she has tweeted three times to correct the previous Tweet about Dr. APJ Abdul Kalam Azad. She did many spelling mistakes in Kalam's name. Which was not tolerated by the followers of "Kalam". As she is a bold girl she was in relationships with different guys in different situations of life.

In the early stage of her career she was with Zoheb Yusuf then after entering Bollywood she was attached with Ranveer Singh who is also a debut actor that time. And Now she is in a relationship with Virat Kohli and everyone knows that. But everyone has ups and downs, while she was doing Bombay Velvet her boyfriend Virat had invested some money and then, the movie was a flop so because of this difference between them increased and recently they came close again. She has also won the Best Actress in Supporting Role Film Fair Award for Rab Ne Bana Di Jodi and Shah Rukh praised her by saying that the success of this movie is because of her not because of me. In 2014 she went through a plastic surgery. It is said that Virat and Anushka are staying together in Mumbai.