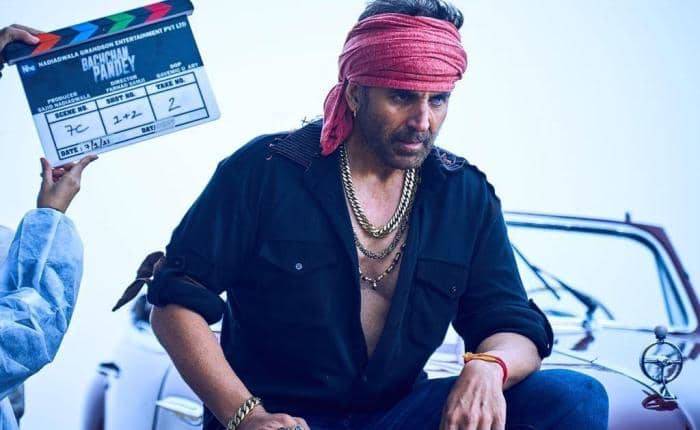 Upcoming Bollywood action movie titled 'Bachchan Pandey' happens to be one of the most awaited movies to release in 2021. Featuring an ensemble cast of Akshay Kumar, Kriti Sanon, Jacqueline Fernandez, Arshad Warsi, Pankaj Tripathi, the makers recently kickstarted filming for the upcoming flick in Rajasthan. Images from the shoot have been surfacing on social media leaving fans excited, courtesy of the cast. However, an interesting image featuring Akshay Kumar has completely taken fans by storm. The image unveils the first look of Akshay Kumar who appears to don a never seen before avatar. The actor can be seen wearing a black shirt with buttons wide open revealing his chest along with denim jeans. Even though Akshay is effortlessly wearing the look of a gangster, he looks dapper and different with a red cloth tied around his head and multiple golden chains and jewellery.

Bachchan Pandey is helmed by FarhadSamji and bankrolled by Sajid Nadiadwala. The movie has roped in actors Akshay Kumar and Kriti Sanon opposite each other. Initially scheduled to hit the theatres on 25 December, 2020 the filming of the movie has gone down the floors just recently. Reports suggest that Akshay Kumar will portray the role of a gangster who aspires to become an actor, while Kriti Sanon will essay the role of a journalist who aspires to be a director. Interestingly, Akshay Kumar will collaborate with Sajid Nadiadwala for the tenth time with Bachchan Pandey. While more details regarding the upcoming movie are awaited, reports suggest that the movie will be released this year.