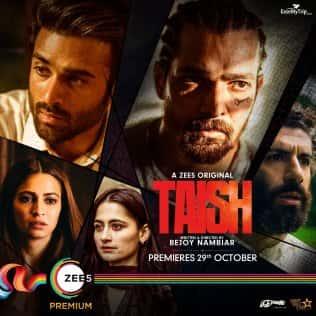 The trailer of Bejoy Nambiar's upcoming 'Taish' has finally been unveiled, leaving fans in a spree of anticipation. Taish is a revenge drama film and series, ready to premiere digitally on ZEE5, from 29 October, 2020 onwards. The trailer commences with an intense introduction of the lead characters essayed by Pulkit Samrat, Harshvardhan Rane, Jim Sarbh, Kriti Kharbanda, Sanjeeda Shaikh, Abhimanyu Singh amid gun shots with every introduction. The trailer instigates with the introduction of a happy, well settled family of two loving brothers, essayed by Jim Sarbh and Pulkit Samrat. The trailer displays the happy family looking forward to a big fat lavish wedding. The trailer moves on to introduce another family which happens to be a contrast when it comes to the first family as this family is enveloped under the dark world of murders and crimes. The characters in this family have been essayed by Harshvardhan Rane and Sanjeeda Shaikh. However, the trailer takes an unhappy twist after the two families come to terms with each other, drastically changing their lives, resulting in violence, murders and blood shed amid the wedding that was supposedly expected to be a joyful affair.

The trailer is promising, transporting the viewer into the lives of the characters in Taish. Taish's trailer is appealing as well as interesting, giving fans a sneak peek into the film and series. The characters and their roles have been beautifully portrayed, leaving the audience empathising with each person. Taish is a story full of revenge, drama and unsettled secrets among two families that go through a situation as unfortunate as a storm. Taish is helmed by Bejoy Nambiar and jointly produced by Bejoy Nambiar and Nishant Pitti. Taish is all set to release as a feature movie as well as a series consisting of six intense episodes. Taish is all set to premiere on ZEE5.