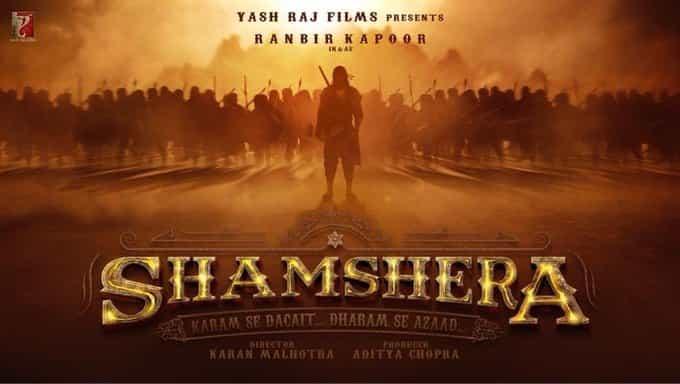 The upcoming Bollywood action and adventure film, Shamshera has already garnered tremendous popularity and anticipation among the general public. The movie, directed by Karan Malhotra is set to hit the theatre screens on 31 July, 2020. Recently, today, the first look of the Ranbir Kapoor starrer was revealed today wherein a dacoit can be seen standing ahead of other dacoits, wearing an angry, focused look. The poster, interestingly, has been revealed exactly around two years after the movie was first announced. The intriguing poster shows the visual of a dacoit donning antique jewellery and a head band, loose clothes, standing in front of a group of dacoits. The motion poster that was shared on the official Twitter handle of Yash Raj Films, shows the dacoit carrying some old ammunitions.

The role of the dacoit, Shamshera and his father will be essayed by Ranbir Kapoor in the movie, as Ranbir is set to play a double role. An excited Ranbir was quoted saying that Shamshera happens to be the movie he had always wanted to act in. The actor also said, “While growing up watching Hindi cinema, I had an image of what a film hero should be…’Shamshera’ allows me to do everything that I had imagined and its a very exciting project for me”. Movie critic, Taran Adarsh also shared the poster on his Twitter handle referring to the poster revelation as a ‘big announcement’. The movie is set in the 1800 era and in the heartland of India. The action drama revolves around a tribe of dacoits who happened to fight against the British for their equality, freedom and independence.