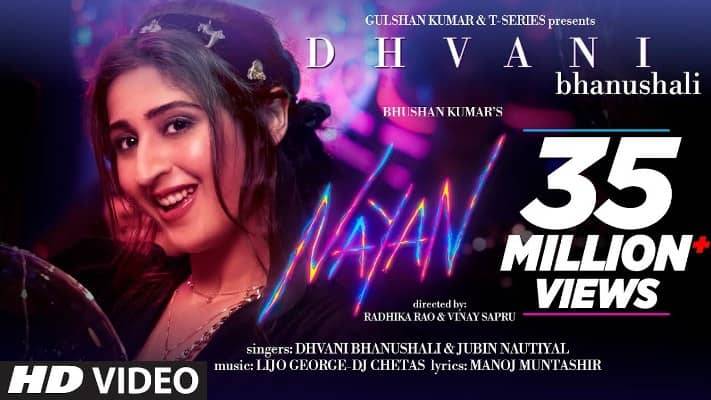 The young and talented Indian singer Dhvani Bhanushali has achieved enormous success and great heights at a very young age and is recognised for her heart-warming songs 'Vaaste', 'Leja Re', 'IshareTere'. Recently, another romantic song sung by the melodious singer is doing rounds among people. Titled 'Nayan', the song released on 8 December, 2020 instantly emerging as a hit as listeners have been grooving to the song and watching its video repeatedly. While fans have loved every song sung by Dhvani, Nayan has also won the hearts of people. The amazing number has been sung by DhvaniBhanushali and Jubin Nautiyal. For Nayan, producer Bhushan Kumar re-established the team of the 2019 super hit song 'Vaaste', DhvaniBhanushali, Radhika Rao and Vinay Sapru. Interestingly, Dhvani's 'Nayan' has been loved and appreciated so much that the music video which was released on YouTube gained 50 lakh views in just a span of 24 hours.

'Nayan' is transporting people back to their bitter and sweet college days. The song is weaving magic in hearts of people through the melodious voices of DhvaniBhanushali and Jubin Nautiyal along with the romantic love story that the song portrays. The video of the song features an ensemble cast of DhvaniBhanushali, Ansh Duggal, Urja Sharma, Ariz Qureshi, Nidhi Sharma, Isha Shah. The song portrays a fresher, essayed by Dhvani who is ragged by her seniors to impress her senior, essayed by Ansh Duggal. The song displays how the duo end up falling in love with each other. Nayan has been jotted down by Manoj Muntashir while DJ Chetas and Lijo George have composed the same.