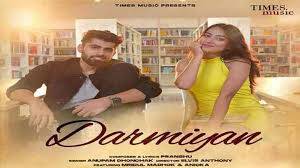 Times Music has released the much anticipated, new song 'Darmiyan'. Darmiyan has finally been released on the official YouTube channel of Times Music. Ever since the song went on the floors, fans have gone gaga, appreciating and loving the song. Darmiyan is all set to be the song that is going to transport a person back to the good old college days. Darmiyan features Mridul Madhok and Anicka in a college setting sharing sweet moments with each other. The song has been sung by Anupam Dhonchak and directed by Elvis Anthony. Darmiyan has been winning the hearts of people as the song attempts to transform hearts back to the carefree, bitter sweet days spend in college, giving people a chance to live amid the beautiful memories spent in college.

Darmiyan's lyrics have been jotted down by Pranshu while the entire shooting of the song has been done at Bennett University. The song has garnered widespread popularity and a good deal of likes and comments. Darmiyan has received tremendous appreciation already and is on its way to emerge as a super hit song. A trailer of the song has been doing rounds on the internet already wherein the lead actors can be seen sitting opposite each other, with their back facing one another. The duo can be seen sitting in a library, exchanging a conversation with each other through letters. The entire setting of the song attempts to transport the viewer back to the college days.