Delhi Police says in court today that there is no case against Salman Khan and Shahrukh Khan for hurting the sentiments of Hindu on the set of Bigg Boss 9. There was nothing that hurts the sentiment of religion because the shot of wearing shoes in a temple was filmed in a studio for the reality show. Police said in the court of Magistrate V K Gautam that Promotion shoot was not done to destroying the sanctity of the Holy site or to hurt of sentiments of the people. 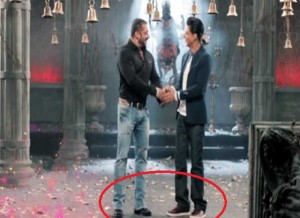 In view of the facts and report, no cognizable offence is made out. The promo was not shot to disturb the sanctity of a religious place or disturb or hurt the religious sentiments of any individual, group, community or section of the society. However, the undersigned is ready to abide by the order passed by the court. The ACMM was on leave and link magistrate Joginder Singh posted the matter for March 2 for hearing arguments. The court had earlier directed the police to file an ATR explaining as to what action it has taken on the complaint filed by advocate Gaurav Gulati. Police said in the report that such complain was filed in Meerut court, which was already rejected. Police also said about the Viacom 10 channel producer answer that Shahrukh Khan came to the set of Bigg Boss 9 and met Salman Khan, with whom he work in Karan Arjun long time ago. The both actors met after a long time, so the director thought to make them meet on the set of Kali temple, as in Karan Arjun they met in Kali Temple only. This idea was not to hurt any sentiments of Hindu Religion, shooting of the promo was done in a studio, what was said was all wrong.

The first winner of the Oscar in 2017