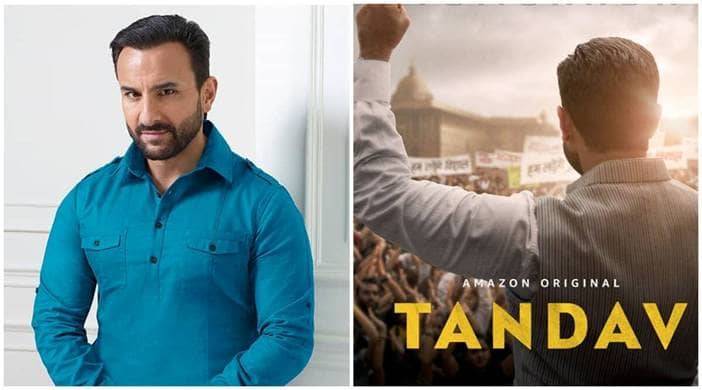 Saif Ali Khan's upcoming political web series titled 'Tandav' will hit the digital platform Amazon Prime Video on 15 January, 2021. The teaser which has been recently released, introduces Saif Ali Khan as a young political tycoon who appears on his balcony to a huge gathering of public cheering for him. The teaser also features the rest of the cast in political roles including Dimple Kapadia, Tigmanshu Dhulia, Kumud Mishra, Anup Soni, Gauhar Khan and others. The teaser is rather interesting as the teaser does not attempt to introduce the roles of the actors but rightfully creates an intense environment, leaving the viewers in anticipation.

What is even more interesting is that the teaser of 'Tandav' carries only one dialogue that is spoken in the background. The entire teaser only showcases the reactions and expressions of the cast however nobody speaks even one dialogue. The dialogue that is spoken in the background attempts to speak on behalf of the entire series, passing on the idea that the Prime Minister happens to the King of a country as he/she rules in it. The dialogue has created an intense scenario amid the fans who are left awaiting a quick release of the series.

The upcoming web series is a political drama helmed by Ali Abbas Zafar and is slated to release in a total of 9 episodes. Interestingly, Ali Abbas Zafar will also make his digital debut with the political web series after directing films like 'Sultan' and 'Bharat'. Ali was reportedly quoted saying that ‘Tandav’ will showcase the power-hungry world of politics. Reports suggest that Saif Ali Khan had mentioned that 'Tandav' happens to be based on the American political drama titled 'House of Cards'. The series is all set to feature an ensemble cast of Saif Ali Khan, Dimple Kapadia, Tigmanshu Dhulia, Kumud Mishra, Anup Soni, Kritika Kamra, Gauhar Khan, Sunil Grover, Mohammed Zeeshan Ayyub, Sarah-Jane Dias, Kritika Avasthi, Dino Morea, Paresh Pahuja alongside other actors.

Film Producer have fear of Censor Board : Kangana Ranaut

Deepika talks on the news over breaking up with Ranveer Singh

Shahrukh Khan is not for short role in Dear Zindagi