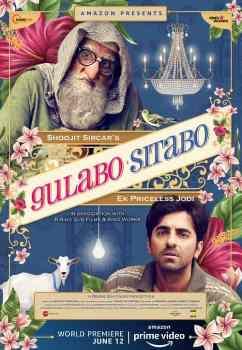 Gulabo Sitabo that is considered to be a big Bollywood release amid the pandemic has finally premiered on Amazon Prime Video and is now available for viewers to watch. Gulabo Sitabo is being counted among the finest films of 2020. The amazing cast of the movie Amitabh Bachchan and Ayushmann Khurrana have weaved their magic, getting the movie a Star Rating of 4 stars.

Plot: Gulabo Sitabo is a comedy movie set in the streets of Lucknow. The story revolves around two witty men, 78-years-old Mirza Sheikh (Amitabh Bachchan), the landlord of a haveli and his tenant, Baankey Sirohi (Ayushmann Khurrana). The movie showcases the continuous banter, fights and arguments among both men in regard to the beloved 100-year-old haveli ‘Fatima Mahal’. Mirza Sheikh who looks after the mansion owned by his wife, 95-year-old Fatima Begum wants to own the haveli. Mirza’s adamant tenant, Baankey neither pays the rent nor leaves the haveli. Baankey however is laden with responsibilities of looking after his mother and three sisters who also taunt him for their condition from time to time. Later, Mirza and Baankey develop a bond.

Review: The movie, though witty and interesting sees an unnecessary stretch in the first half of the movie, leaving the viewer tired and bored. The movie is quite hilarious and subtle, leaving the audience in splits. The second half of the movie has the audience gripped as the cast weaves magic of emotionally attaining the viewer’s sympathy and pity for the situations in the film. Gulabo Sitabo is all about the ups and downs that the men face, their regular trips to the court, sometimes to the police station and chasing each other around the haveli. Mirza’s innate desire of being the legal owner of Fatima Mahal and Baankey’s tantrums when it comes to pay the rent happen to be the backbone of the movie.

Direction: Shoojit Sircar has worked hard to bring out beautifully the relationship between the prominent characters, Mirza Sheikh, Baankey and the mansion. From the first half of the film, it seems that the director’s motive shifts from the needed direction. Even though naturalistic and well explained, Shoojit’s direction appears to stifle at one point making the movie look directionless and somewhat boring. Director Shoojit Sircar has however been successful in his task of bringing out both the characters and their problems to light as they are well-established.

Why To Watch: Gulabo Sitabo is a family drama and a one-time-watch. The movie is hilarious and light-hearted. Gulabo Sitabo is also easily available on Amazon Prime Video and viewers can watch it sitting right inside their house. The movie also attempts to bring together an ensemble cast of talented actors like Vijay Raaz, Brijendra Kala, Farrukh Jafar. However, the duo Amitabh Bachchan and Ayushmann Khurrana have appeared on-screen for the first time together and that makes the movie a worthy watch.